My 8th training week in the Mille Cymru campaign was a little different to the standard training plan, as has been the case throughout most of April, thanks to weekly travel disruptions to my training plan throughout the month. 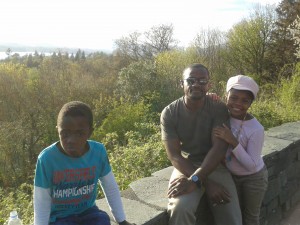 However, I didn’t let my conditioning go during this period and instead I improvised. My training logic is to focus on the most important aspects of the training plan when I have to abbreviate it. In the case of the Mille Cymru Audax the challenges of the event will be the distance (600-miles), pace (75 hour time-limit) and the climbing (52,000 feet). So my focus in the weeks of travel was to ensure I completed my weekly long ride at a reasonable pace and also did some aspect of climbing strength training – just two sessions per week.

Even in those busy travel weeks I could always find two days which could theoretically be used for training. My decision was to use on of the training days for a full-body weight training session (in the gym) and the other for a long ride. So that’s pretty much what I’ve been doing throughout April – just fitting in the long rides and the strength sessions. Where opportunity has presented, I have also done an actual hill repeat session (so far, just once in April). 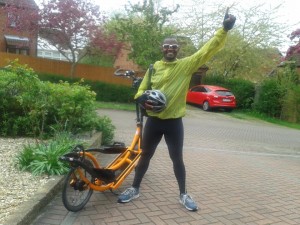 I do appear to have retained my hill climbing fitness, for the time-being, despite missing so many actual hill sessions. The main thing I have done to keep the climbing conditioning during this period of disruption has been to ride all the slopes in the highest gear possible on all my long rides. That way, I make hard work of even the gentle slopes – and keep my ability to ride in high gears at a low cadence.

I’ve managed a weekly long ride of at least 100-miles distance in every week since I officially started training for the Mille Cymru Audax (at the beginning of March). So I think that’s 8 of them in a row, now. In the week leading to Easter I had to double up because I would not be able to ride in my usual early Sunday morning slot – so I did a second long ride in that same week, on the Thursday night before Good Friday (yes, I completed the ride just before midnight). That was just four days after I had done a 126-miler on the Sunday before and was my hardest training week so far, as a result. The 126-miler had gone really smoothly and at a good pace – but the 106-miler that followed was ridden at a considerably slower pace…

In my most recent tempo ride, on the Tuesday after the Easter weekend, I was able to push at a sustained heart rate between 150 beats per minute and 165 beats per minute. The highest heart rate I can sustain (outside of sprinting) is 165 bpm, so I was really pleased with that session. I must admit my leg muscles were very sore immediately afterwards and I had trouble walking down stairs for the next 3 days. It felt like I had just run a marathon!

For me, having sore thigh muscles is actually quite a good feeling – so I made it ‘worse’ by doing a gym session the next day, while my legs were still sore. Thankfully, they didn’t get too much worse…