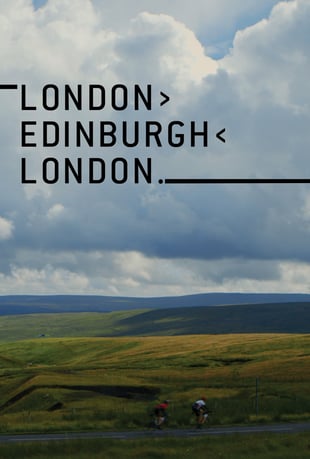 The film is well made, with really good image quality, which I think is quite important for this type of film (especially in view of the impact of imagery and scenery on long distance riders). The film appears to be aimed at summarising a ride of the epic scale of LEL 2013 from the perspectives of various different types of people who attempted this challenge, ranging from total cycling novices to the highly experienced, with yet more riders at various stages of experience somewhere in between.

This film does a good job of capturing some of the main reasons behind people taking on adventures of this sort because it gives some of the riders the opportunity to explain why they are doing it – which is always insightful. I often find that people tend to have a wide range of reasons and motivations for this sort of undertaking – although only a limited number of major themes tend to predominate.

It’s also interesting to watch how the various riders evolve in their view of the ‘expedition’ as it progresses – as well as the continuous change in the riders’ perspectives as they progress through the journey. The film follows riders at the front of the field, the middle of the field – and also the back of the field – and it is interesting how each and every one of them is pretty much fighting the same type of battle.

What you also pick up, as the film is spontaneously narrated by the riders themselves, is how the experience of any individual rider varies greatly in different parts of the journey (there are some bad parts and also some good parts, in a continuing cycle of emotions which the riders experienced throughout the event).

Also interesting are the coping strategies the different riders showed – and the almost universal commitment and determination to do their best, regardless of how bad things may be looking (or how negative they were feeling at that point in time). There are a few moments that’ll make you laugh, because long-distance riders tend to maintain their sense of humour as the task becomes more grim! Some of the guys interviewed were really funny – especially as the event had worn on!

For anyone without the experience of such an adventure, but distantly interested in the prospect of such an adventure, seeing how different people take on such a challenge will be really encouraging (and seeing that a broad spectrum of ages and abilities are still able to succeed in a challenge of this epic nature is likely to be very positive). The film shows that success in rides like this is largely about having commitment and determination. I quite like the way all the riders always seemed to start out with tight plans – and then they soon realised the script had to be re-written once the riding had actually begun!

That unpredictability in long-distance cycling is an important part of the challenge – and anyone who is successful in this discipline of cycling will attest to the fact that the unpredictability is something to be embraced (rather than feared) – and I think this film captures that aspect to an extent. Plans are often just ‘crutches’ which riders use to get themselves to the starting line with confidence – but once you are riding in an event like the LEL it becomes mainly about the adventure (and the script becomes rather unpredictable). All you will know is that you have started the ride and you will, somehow, finish it (but how and when you will finish are usually variables beyond your ability to predict, until the end is quite near)…

As general entertainment, it’s often hard for me to rate films like this. As someone who rode in the event myself, the imagery and scenery captured was excellent – and it was really like a trip down memory lane, in that regard. It was also nice to see some familiar faces from the event – people I rode alongside for much of the event.

It’s always challenging trying to spin narratives in a film about an event of this size and duration, with so many people taking part – many of whom are not easy to catch in regular sequence through the ride (and all of whom will have fantastically interesting stories to tell). One of the most gripping parts of the film (for me) was near the end – and it illustrated this point I am making (about narratives) quite beautifully. I was pictured riding past a man at the finish line, a man who was staring intently into the distance. I actually have no recollection of passing this man, having been so focussed on what I was doing myself at the time – and yet he was part of probably the most gripping narrative in the whole film!

The film makers (I believe purposely) strayed away from capturing any metrics relating to time and distances when they showed any of the scenes. I think that was a good move (and will likely suit the main audience for a film like this – whom I believe would be people with a vested interest in taking on an epic long-distance cycle ride like the LEL, if not the LEL itself). Definitely, the final scenes in the film were truly stirring and well presented – and I think they summed up the essence of this event nicely.

In summary, it was a good watch – and a very good documentary of LEL 2013 (especially pertinent for anybody who is interested in taking on the LEL themselves, or similar rides like the Paris Brest Paris). It’ll certainly help such individuals get a more vivid ‘feel’ for what these events really look like – and the types of experiences they can generate. I think, in that regard (as a way to psychologically prepare a novice for a big multi-day ride – or to get a first-timer to commit to such a ride), the film pretty much touches on everything they’d need to know. I think this film should allow riders who are contemplating taking the ‘big step’ to do so with greater conviction…