Ride results for ElliptiGO Ultra-Endurance Team riders in 2017 are covered in the blog below, showing what’s possible when ordinary people aim to achieve extraordinary things!

January: Experienced riders Andy and Tim put in a 200km Audax ride on ElliptiGO Arc bikes in a calendar event in Oxford. 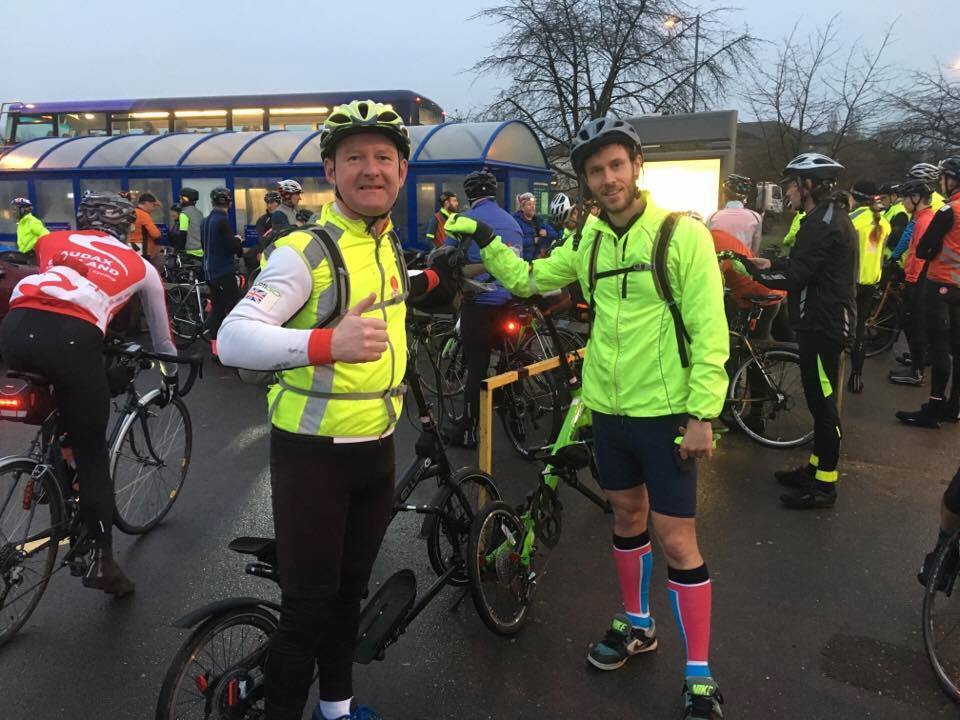 March: Idai put in a DIY 200km Audax ride on an ElliptiGO Arc bike and Scott also put in a successful 200km ride (in a calendar randonneur cycling event in Ohio, in the US) officially becoming an ElliptiGO Randonneur. Stuart also completed the longest ride of this month – a 300km calendar Audax UK event in Oxford.

April: Scott put in a 300km ride in Ohio, in the US – another calendar randonneur event – and another sterling effort! Tim also completed a 200km Audax calendar event, with over 15,000 feet of climbing (an incredible effort, finishing in just 12 hours)!

On 14th May Tim Woodier became the first ElliptiGO rider EVER to complete an Everesting hill climbing challenge. Everesting involves riding the vertical elevation of Mt. Everest (8,848m or 29,029ft) by repeating a single hill climb over and over again, in a single ride, until the target elevation has been climbed. Well done Tim, what an achievement! 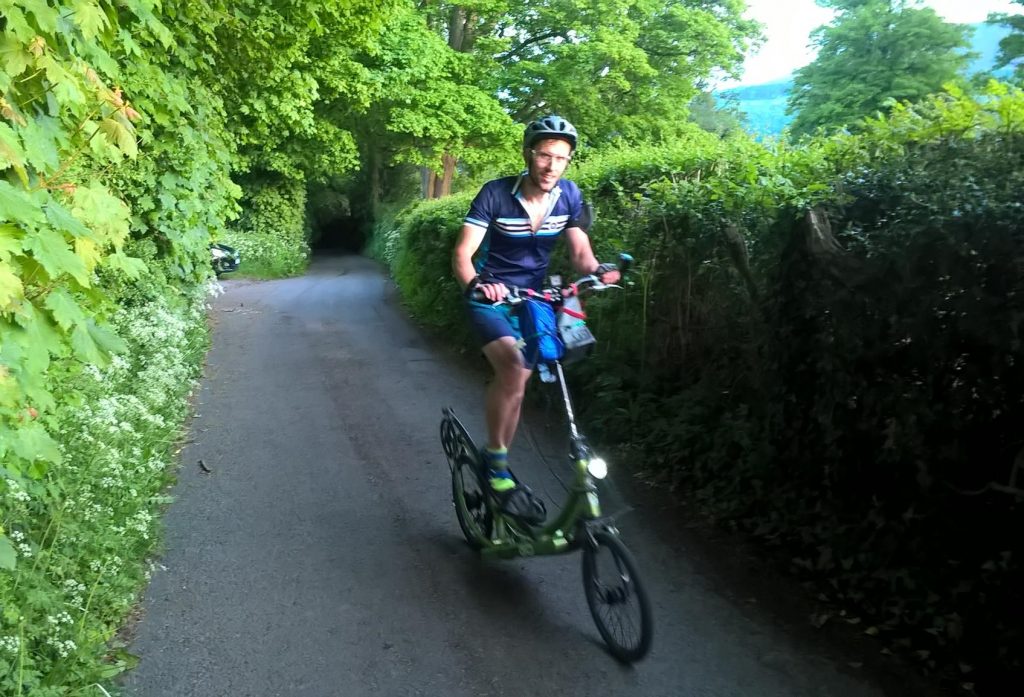 On 20th May, Andy, Idai, Stu and Tim accompanied Kitty (from Holland) in her first 400km Audax ride, an epic adventure which was completed in 26 hours and 8 minutes, covering 404km. During this ride Kitty also set the best ever women’s ElliptiGO 24 hour distance (covering 370km in the first 24 hours of the 404km ride)!

On the same day Scott completed his first 400km randonneur event (in Ohio) – in 24 hours and 5 minutes – and now he has almost completed his Audax Super Randonneur Series.

On 11 June 2017: Ben, Ian, Mark Chapman, Mark Payne & Simon Newton joined Idai on a 218km DIY Audax ride from Milton Keynes to Cambridge. For Ben, Ian and Mark Payne it would be their first ElliptiGO Randonneur event. There was a bike crash incident half way through the ride but it generally went smoothly – and was a complete success for The Team! A 10-minute video summary of this outing can be seen below: 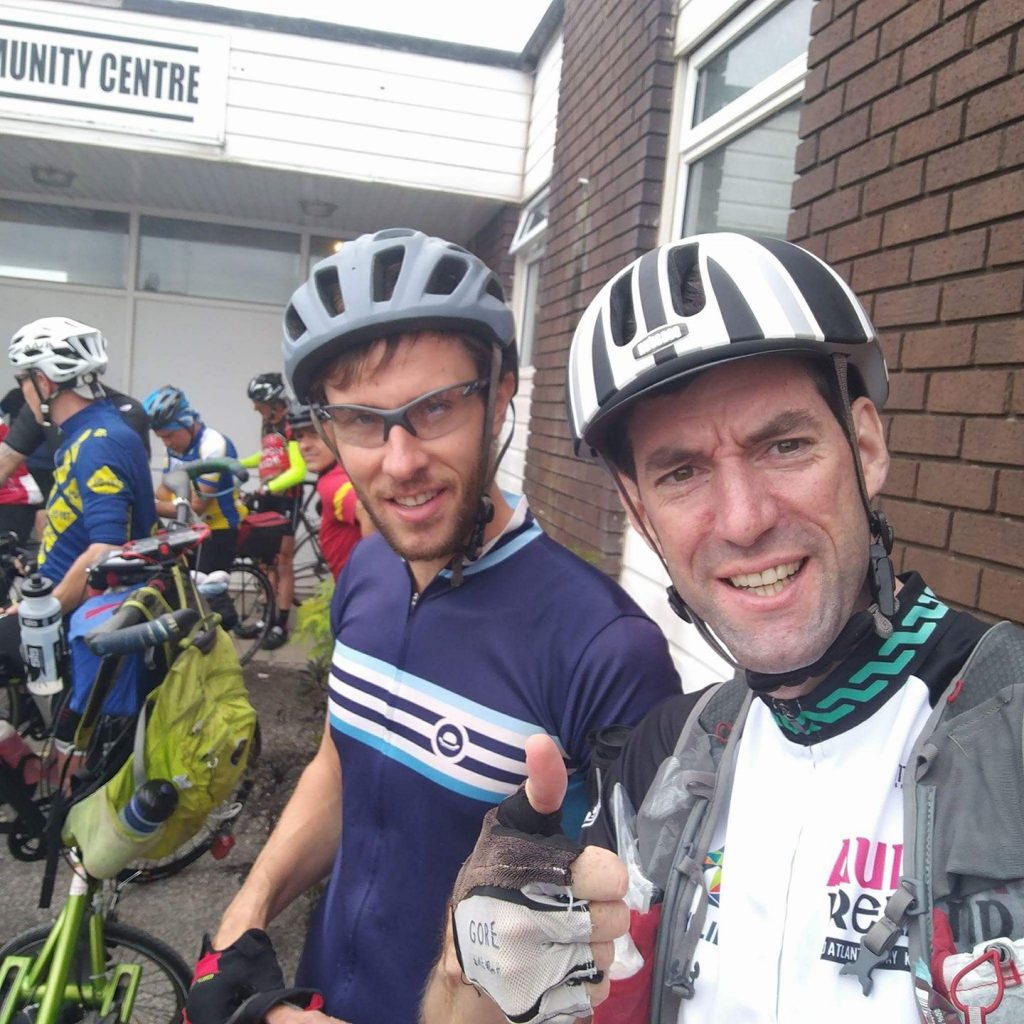 Stu withdrew from pursuing the 75 hour time-limit in the Mille Pennines Audax on 8th July (the second day of riding) and continued the ride as an informal tour. Tim was able to push on alone and he completed the incredibly challenging 1,000km ride (with well over 13,000m of climbing) within just 3 days. A truly outstanding endurance achievement!

Billy made an impressive effort in the London Edinburgh London (LEL 2017) challenge, with a time-limit of 117 hours within which to conquer the distance. He covered 946km before withdrawing from fatigue in the harsh weather conditions. He had been tracking within the time-limits throughout his ride, until his withdrawal, and his ride stats are outlined in the table below: 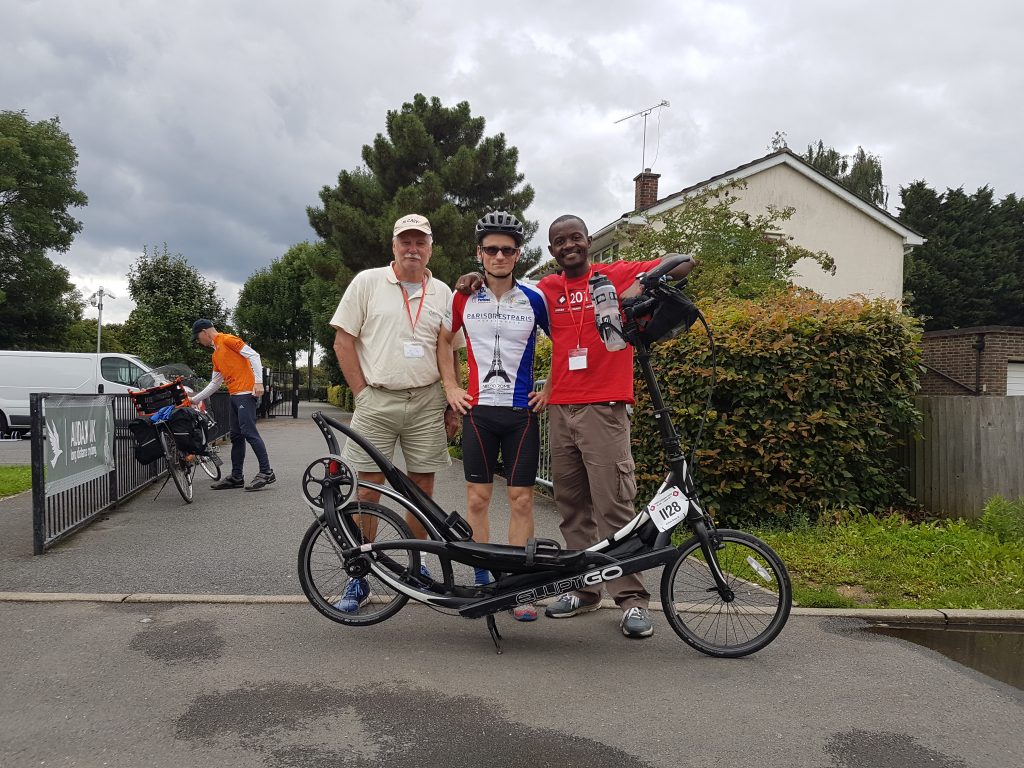 Billy, about to start the LEL 2017 Audax (with his Dad and Idai cheering him on)… 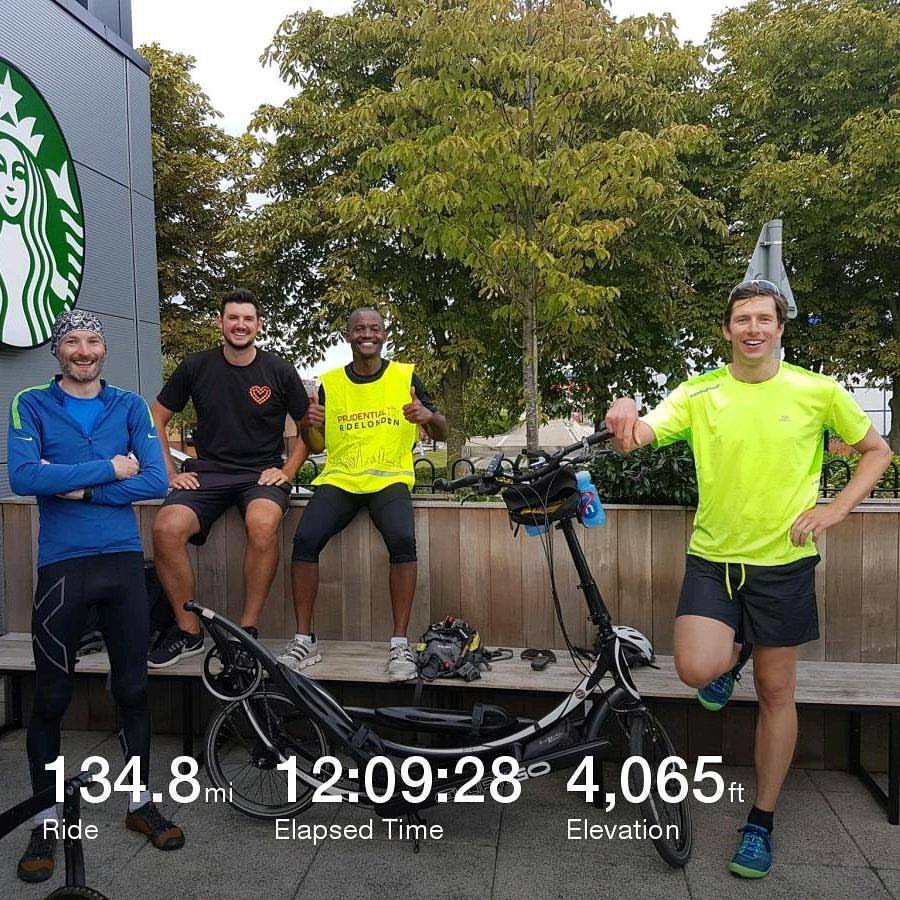 Chris, Idai, Simon and Thomas took on the now tried and tested 220km course from Milton Keynes to Cambridge, with the aim of seeing Chris around his first Audax cycling ride. It was a great day out and all the riders delivered good performances – welcoming Chris as the 8th rider to join The ElliptiGO Ultra-Endurance Team in 2017! The goal is for 10 new riders to join The Team in 2017 so we only need two more audacious souls to step forward in order for us to hit that target!

A big well done to all the ElliptiGO riders involved in the randonneur endurance cycling challenges taken on so far this year!

August 2017 was a busy month for Endurance Team riders and a number of very notable non-Audax cycling challenges were undertaken by team riders.

Alan and Idai completed an Everesting Cycling Challenge (riding the height of Mt Everest by way of hill repeats on a Welsh hill called The Tumble – located just outside Abergavenny). You can read more about their challenge on this link and can also watch a video summary (above). 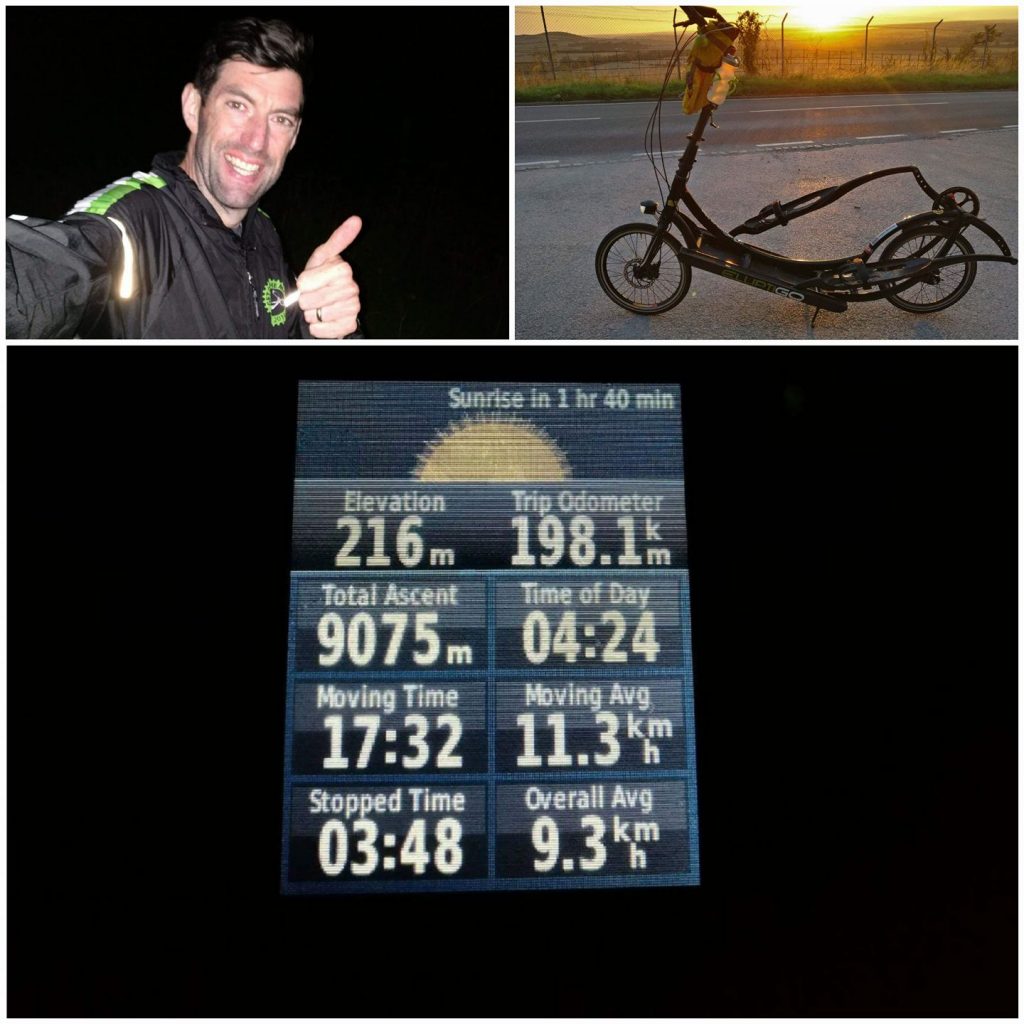 Ironman triathlete Simon put in his lifetime longest bike ride when he completed a 220km ElliptiGO Audax ride with Idai, Stuart and Thomas. Alan also joined the ride (until the 50-mile mark) mainly as a social training ride – and it was a long but generally pleasant day on the road for all concerned. The weather conditions were cloudy and windy – but also relatively mild. Simon’s success now brings the total number of new ElliptiGO Randonneurs (in 2017) up to 9 in total, but will there be a 10th? We have 3 months left before we find out!