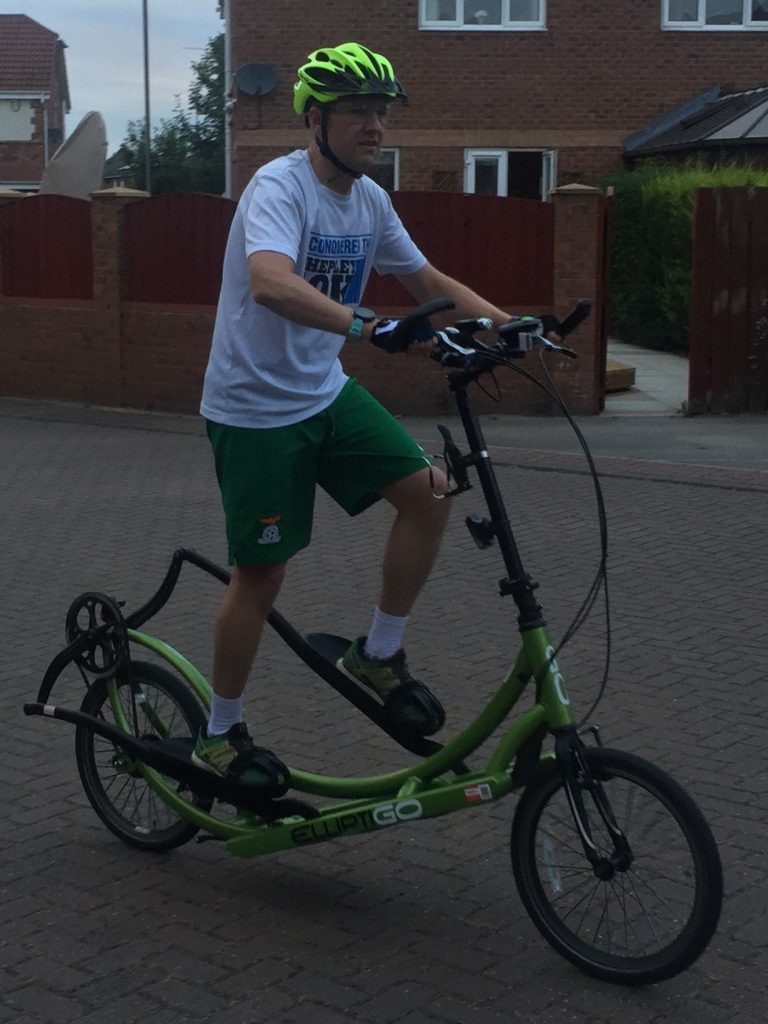 Personal information: Married to Donna, who also runs, but is too scared to try my ElliptiGO (apart from when it’s set up inside). 2 daugters: Libby (11) and Lucy (5).

Sporting background: Took up running and tennis in late 2013, following several years of leading an unhealthy lifestyle, save for the occasional 5-a-side football match and 2 serious football-related injuries (knee and shoulder). Did first race in early 2014 and first marathon in autumn 2015 – and have now competed in over 60 races and over 100 parkruns. I bought an ElliptiGO in mid-2015 (having seen Simon Newton on his) and got ‘hooked’ straight away. I don’t play football any more…

Biggest achievements to date: Breaking the 80-minute barrier and finishing 2nd place in a half marathon in 2016, (unofficially – long course) sub-37 minutes for 10k (2017) and sub-19 minutes for 5k (2015). Having the confidence to get back on the ‘GO following a serious road accident, though I am reluctant to go out when it’s dark.

Longest rides: 50 miles in autumn 2016 on my ElliptiGO and 45 miles the week before on my mountain bike.

2017 goals: Goal #1 is definitely doing a sub-3:00 hr marathon, which I hope to achieve in Manchester in April 2017 (otherwise Chester Marathon, in October). Other goals include sub-37 min 10k, sub-18 min 5k and sub-1:00 hr 10 miles (only 15 seconds to knock off!). I would also like to re-start playing tennis, following a year out through injuries. I am also aiming to complete a 400km Audax ride on the ElliptiGO – in May 2017 – riding with other new ElliptiGO Randonneurs (and also alongside some of the most experienced ElliptiGO long-distance riders out there)…

How I train: I try to alternate days between a run of 6-10 miles (including speed or hills every 1-2 weeks) and an ElliptiGO or MTB ride, but this is more difficult when the weather is not great, so I usually do less riding in the winter than in the summer. Weekends are reserved for parkrun (with a ‘GO ride there & back) and long runs (10-20 miles). I will also commute to work on my ElliptiGO when the weather conditions allow (around a 30-mile round trip). I do occasionally take rest days, but would rather do an easy 10-mile ride, or 5-mile run, than do nothing.

Interesting fact: I am a ‘polyglot’, speaking several languages and having a master’s degree in medieval languages (Dutch and Danish/Swedish).