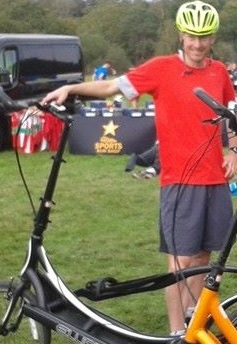 Sporting Background: Competitive running since the age of 13, mainly track and cross-country for Highgate Harriers, plus a few years playing club football – and early years competing at swimming.

2017 Goals: My aim in 2017 is to ride in some cycling events in the USA (while on holiday there) and also to ride in a range of Audax UK long-distance cycling events – alongside new ElliptiGO riders aspiring to become Randonneurs (over distances ranging between 200km and 600km).

How I train:
Below is a video of one of Henry’s training sessions in London:

My training plan is rather changeable to fit around my job as a freelance consultant in the oil and gas industry. However, I always aim to ride around 150 ElliptiGO miles per week and swim twice a week with a triathlon club (3000-4000m total each session).

My overall aim is to return to middle-distance-running by the end of 2017, and be competitive in 2018, using the ElliptiGO as the dominant training method for my running.

Something most people don’t know about me: I was in the Royal Air Force (briefly).