Numerous articles have been written over the past decade relating to conditioning of “the core” – or midsection – often stressing how important such activities are for all athletes (sometimes it’s suggested that core strengthening is essential for all individuals – if they are to experience good posture and minimize back injuries, etc). I guess at this point I would be expected to venture to say that I don’t agree with this perspective and that I will offer an alternative view – however, I won’t. 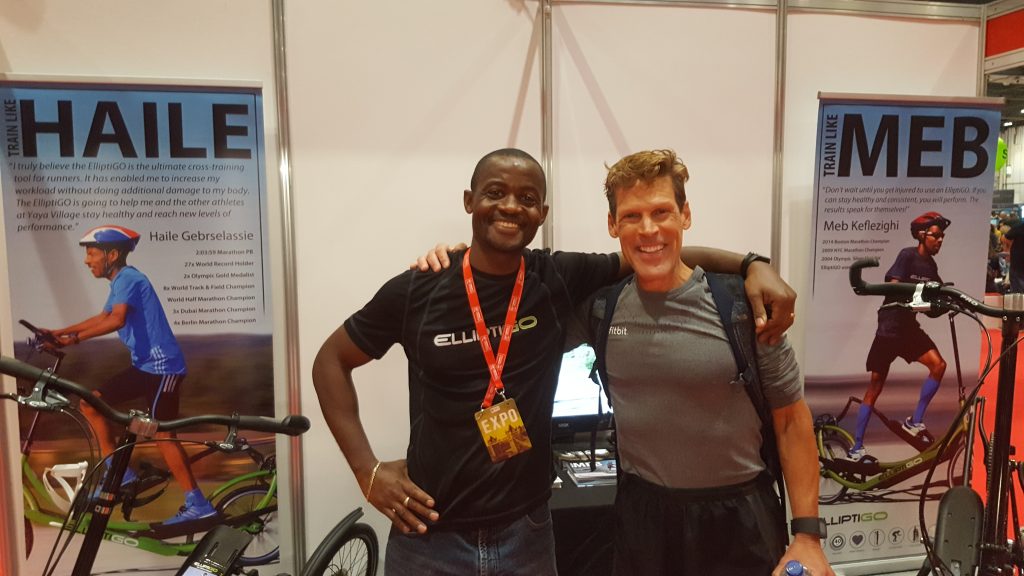 The facts are the facts – and I fully agree that core conditioning is essential for every human being (and not just for fighters). However, whilst some human beings are exempt from ‘mandatory’ core training – such as bank and building society managers, who can probably do their jobs to the same high standards as they already do (even with a bad back) – the truth is that any fighter who is not making valid efforts to fortify his/her torso is heading for trouble. Fighters don’t have the luxury of ignoring core conditioning.

This month’s article is aimed at clearly explaining the significance of fortification of the core and offering options for fortifying the core – with specialist input from a master of time-management and multi-tasking, ultramarathon running legend Dean Karnazes. Dean was kind enough to offer his personal experience and views on building a rock solid midsection and core (while still having time for all your other training and the finer things in life).

I am often told by martial arts students, when I visit clubs, that they can’t find the time to fit in a proper conditioning routine alongside their martial arts. I don’t buy into that because I believe when we seek solutions we invariably find them.

Dean Karnazes has a wife and two kids, lots of professional commitments – and a running regime which sometimes sees him cover over a hundred miles a week, (and until recently he also had a 9-5 job) but he still fits in all his conditioning – so no excuses!

First of all I’ll provide a brief outline of Dean Karnazes’ credentials and background, to familiarise readers who don’t already know about Dean and his incredible endurance ‘exploits.’

Dean Karnazes was born in 1962. He is believed to be the most famous distance runner in America. He was listed as 27th in the Time Magazine list of the world’s 100 most influential people in 2005 and when you read his motivational story in his book Ultramarathon Man: Confessions of an All Night Runner, you’ll realise why this was. Dean has also won the Four Deserts Race Challenge and the Badwater Ultramarathon – and has swum across San Fransisco Bay, for good measure. 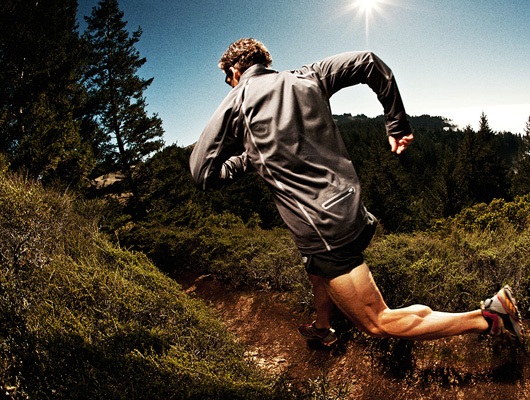 He’s been Competitor Magazine’s Endurance Athlete of the Year (3 times), he’s been ESPN ESPY Outdoor Athlete of the Year, he’s won two Emmy Awards, been inducted into the Men’s Journal Adventure Hall of Fame and he’s run the Western States 100 Mile Race in under 24 hours – an impressive 11 times (no small feat in endurance running terms)!

Dean often gets by on under 5 hours sleep every night – in order to fit in his busy schedule and still have family time – yet he is able to perform physically at a very high level and his physique is impressively conditioned. He knows a few things about reaching his own conditioning limits and about multi-tasking, which is part of the reason I asked him to share his insights with MAI readers. 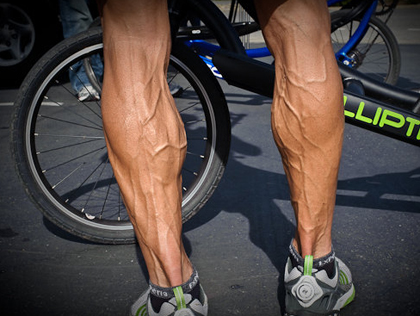 Dean’s well-formed legs are the result of balanced, consistent and varied training… often referred to as “cross-training”

To start off, it’s worth defining what your “core” actually is and explaining the role this section of your anatomy plays in your day-to-day health (and also in combat sports). For our purposes, the core is the lower torso – the area linking your pelvis and your thorax. That’s mainly your abdominal/midsection area and lower back.

The muscles of the lower back coordinate with the muscles on the sides of the lower torso (obliques) and with the frontal abdominal muscles that make up the so-called “six pack” area. These muscle groups support and protect the spine by tensing in a coordinated fashion to hold the spine exactly in the positions it needs to assume. As is the case with all other muscle groups and joints, the joints and flexible parts of the spinal skeleton are cushioned and protected by having strong muscles supporting them. This is the reason why we need to condition our entire bodies and this is why the midsection especially must be conditioned (to avoid spinal problems, wear and tear and general back pain/injury). 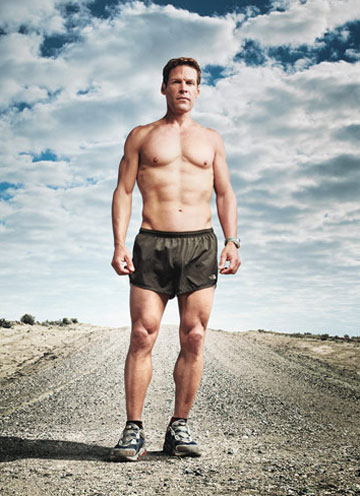 Dean Karnazes – The lure of the Open Road…

In addition to general support functions, for martial artists most hard strikes require power generation from the legs and midsection – with the limbs only requiring static strength to remain rigid at the moment of contact. For example, if you throw an orthodox right hook, the driving power is actually generated from the ‘rear leg’ on the same side as the punching arm – as well as from the twisting (torque) generated by the midsection (as the torso twists downwards and to the left). The strength of the shoulders and chest is mainly required to hold the arm firmly in place, as it strikes the target. The same thing occurs when you throw elbow strikes. Good kicks also require a very strong and well supported spine, as does groundwork (and ground-and-pound work). 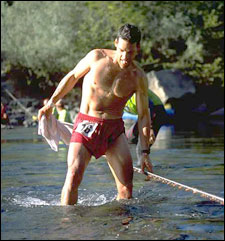 Idai Makaya: How often do you do training for the midsection?

Idai Makaya: When do you fit in your midsection training – before running, after running, during runs – or on its own in a separate workout?

Dean Karnazes answers: Not during running, but anytime (and every time) else throughout the day. I do sets continually during the day, even at the office.

Dean Karnazes answers: I do them all. People say things like, “the gut wheel is bad for your back,” but I say rubbish (to steal one of your vernaculars). If you’re feeling it in your back it means you’re recruiting those muscles, and that’s a good thing!

Idai Makaya: What sort of exercise volume do you use for the midsection – sets, reps, etc?

This essentially recruits most of the muscle sets of the abdomen and lower back, starting with the lower abdominal region and working up.

Idai Makaya: Do you think different sorts of athletes should approach core/midsection training in different ways – or would you say the midsection requires more or less generic conditioning for stabilisation of the spine and most people would get by using the same exercises (regardless of sporting discipline – or regardless of if they are even athletes or not)?

Dean Karnazes answers: I’m a firm believer that every type of athlete benefits from a strong core/midsection (even golfers!).

Idai Makaya: I read that you do a lot of ‘cross training.’ I feel this is particularly pertinent to martial artists because I am a strong believer in the concept of athletes preparing for their sporting activity with different sorts of alternative

activities (aimed at improving different aspects of their conditioning). When do you get the time to fit in other sporting activities – when your running schedule is so busy and your life in general is so hectic? Again, many an everyday martial artist can identify with heavy time constraints and your multi-tasking talents are world class. Please tell us more.

Dean Karnazes answers: Training has to be part of your lifestyle. I’m “training” constantly throughout the day, which includes never sitting down at all (yes, my office desk is elevated to waist level so I can stand on me feet all day). I do reps of push-ups, sit-ups and pull-ups (I had a pull-up bar installed in my office) in between emails and conference calls. I certainly empathise with those athletes who struggle with finding enough time to train, and I would say make training a part of your daily routine in everything that you do.

Idai Makaya: Many people, myself included, believe that the appearance of the body often gives a good indication about it’s levels of preparedness for athletic activity. Your physique seems to reinforce this belief. What are your thoughts on physical conditioning for athletes – do you believe you require an alternative conditioning regime to truly realise your full physical potential, or do you do your strength exercises for general fitness (or other reasons, maybe)?

Dean Karnazes answers: One time someone asked me how I got such defined muscles in my legs? Let’s see, you run 60-70 miles a week, mountain-bike, surf, rock climb, stairclimb and hit the gym, and gosh, it just seems to happen (laughter). It’s no mystery that those with great bodies condition the hardest. 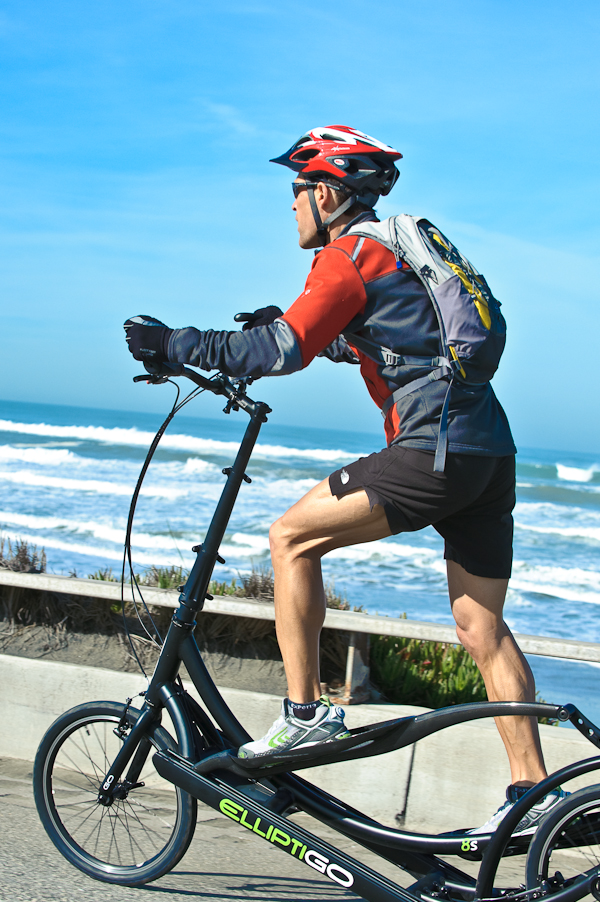 Dean Karnazes answers: My belief is that endurance training must be the foundation of all else. Without good endurance and stamina, all the bulk in the world is not going to help. Martial Artists are a prime example. It’s the individual with the right combination of endurance and strength that usually comes out on top.

Idai Makaya: How much of your physical potential do you believe you have achieved so far – and how much more, if any, do you still believe you will achieve?

Dean Karnazes answers: I still think I have plenty to go. My endurance and strength actually seem to be improving as I get older. My speed is decreasing, but my ability to go further and further is still on the uptick.

Idai Makaya: What lies ahead for the Ultramarathon Man now? What plans do you have in the coming months – or years – and are there any new inspirational projects you’ve been working on that you think our readers should know about?

Dean Karnazes answers: Starting in 2011, my dream is to run a marathon in every country of the world within one calendar year.  There are currently over 200 countries in the world, so this would be quite an undertaking.  I’d like to invite people from each of these countries to come out and join me.  I think the world could use something like this. There are so many things that divide, so many things that separate us and tear us apart.  Running is an activity that brings people together, that unifies and unites us.  It would be a great forum for humanity to put aside our differences for once and join together side-by-side to celebrate the things we have in common.

[Note, Dean Karnazes has altered his 2011 plans and embarked on a televised 75-day run across America. You can get all the details here.] 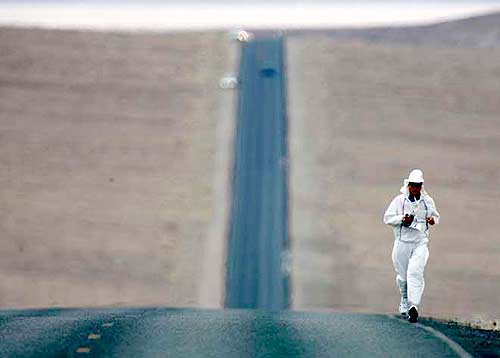 There you have it – from the Ultramarathon Man himself. Get to the core of the matter and fortify your spine. Find ways to save time and get all your conditioning training in. I’ll be back next time with more new insights and discussions into how we can condition ourselves to become the best we can be. Happy training until then! 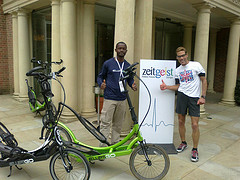