I am a Health & Fitness Evangelist (i.e. coach & mentor) with a passion for sharing sustainable, effective & innovative routes to optimum well-being and peak physical performance.

All my fitness & coaching services are outlined in detail on this page and you can make bookings on this link. 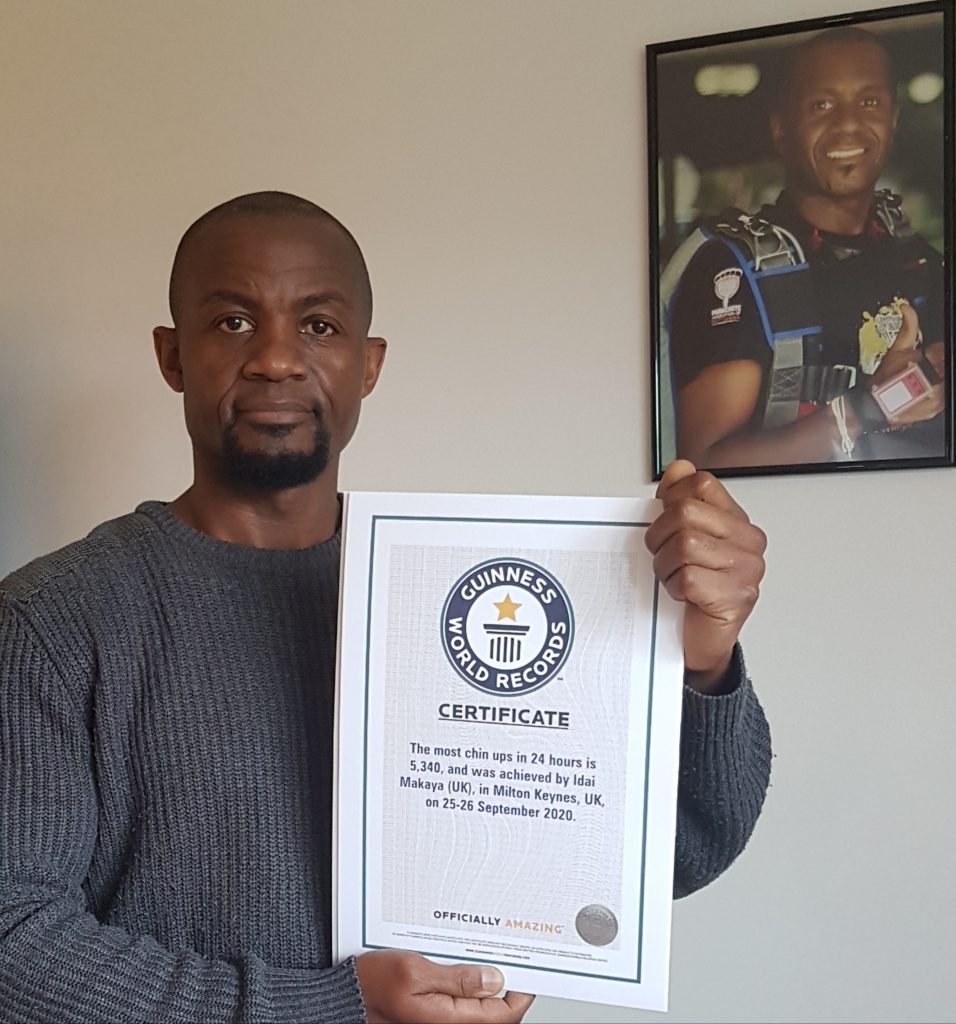 Although I have set a number of Fitness World Records my number-one personal and professional goal is to help as many people as I can to meet their own health & fitness goals by applying the knowledge I’ve gained over decades spent exploring human physical performance.

My results speak for themselves: across the last decade I have trained and mentored hundreds of people who’ve gone on to achieve weight loss, fitness and sporting goals which they previously hadn’t dared to dream were possible.

As well as running a personal training studio in Milton Keynes I also offer remote fitness coaching to people around the world who want to take their health & fitness to higher levels. More information about my background and my personal achievements can be found below.

I have a BSc Degree in Biology & Chemistry and a Business Diploma in Marketing. I am a freelance medical writer and fitness magazine columnist and have written the regular Martial Arts Conditioning Column in Britain’s leading martial arts publication – Martial Arts Illustrated Magazine – for many years. My articles and interviews on Health & Healthcare Matters, Fitness and Self Defence regularly appear in a variety of magazines, newspapers and websites.

I hold a Black Belt in the Martial art of Taekwon-do (I.T.F.) and I also train in Thai Boxing and Western Kick-boxing. I’ve had two 2nd place finishes at the British Taekwon-do Championships and I am a strong advocate of Mental Conditioning & Visualisation Techniques to facilitate the achievement of one’s true potential. 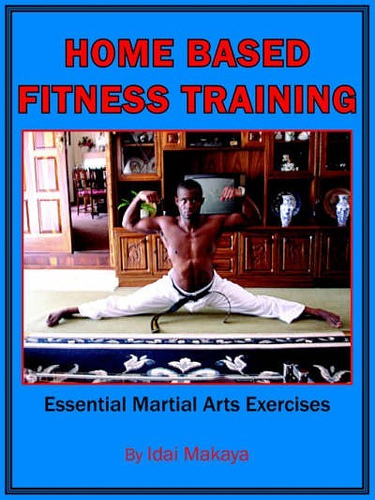 I have completed an Everesting challenge on an elliptical bike (that’s riding the height of Mt Everest in a single ride, on a single hill) and have ridden more than 100 century rides (that’s rides of 100-miles, or further) on the ElliptiGO bike, in the decade between 2010 and 2020. I am also one of the most experienced elliptical cycling fitness coaches in the world. 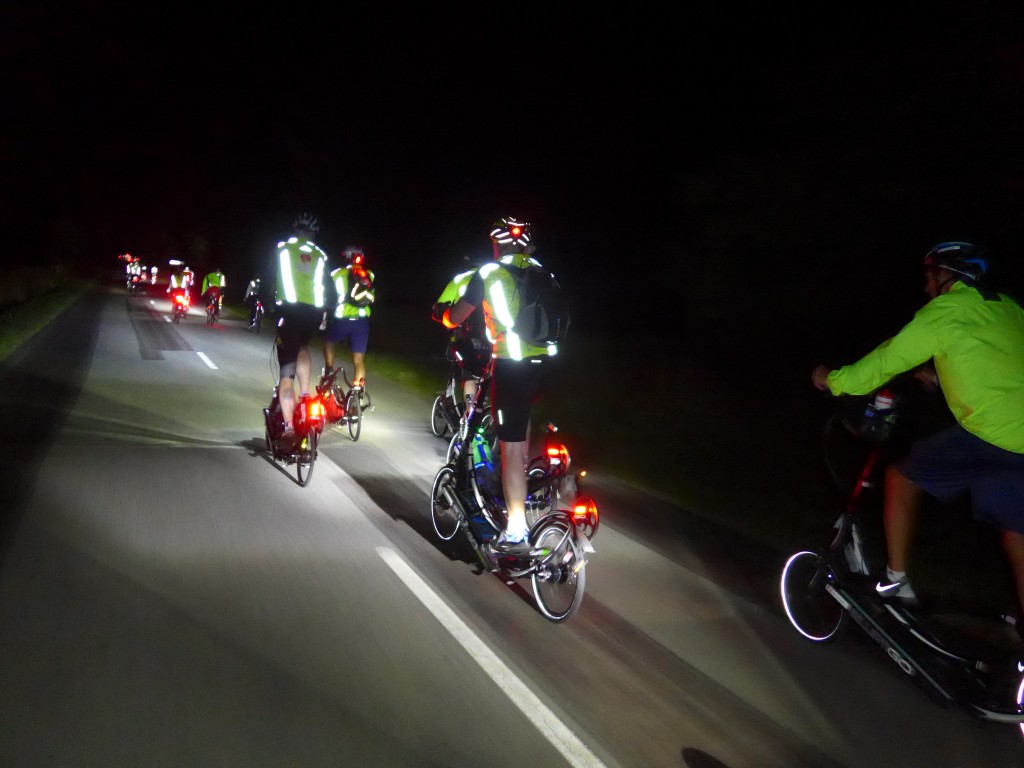 In November 2013, I was the invited Guest of Honour and Keynote Speaker at the Audax UK (National Long-Distance Cycling Association) Annual General Meeting & Awards Ceremony, after I successfully completed the 1,418 km London Edinburgh London Audax cycling challenge (within the 116 hours & 40 minutes time-limit) on an ElliptiGO bike.

In August 2015, I became the first person in The ElliptiGO Ultra-Endurance Team to complete the 1,230km Paris Brest Paris Audax cycling challenge (the world’s premier long-distance cycling event) on an ElliptiGO bike – covering the distance in 83 hours & 38 minutes (which is the elliptical cycling record for the event).

In May 2016, I took on the iconic 1,368km (850-miles) ride across Britain from Land’s End to John O’Groats completing the challenge in a new elliptical bike Guinness World Record of 120 hours & 4 minutes (5 days & 4 minutes). This record-breaking adventure was ‘immortalised’ in the 2018 edition of the Guinness Book of World Records. 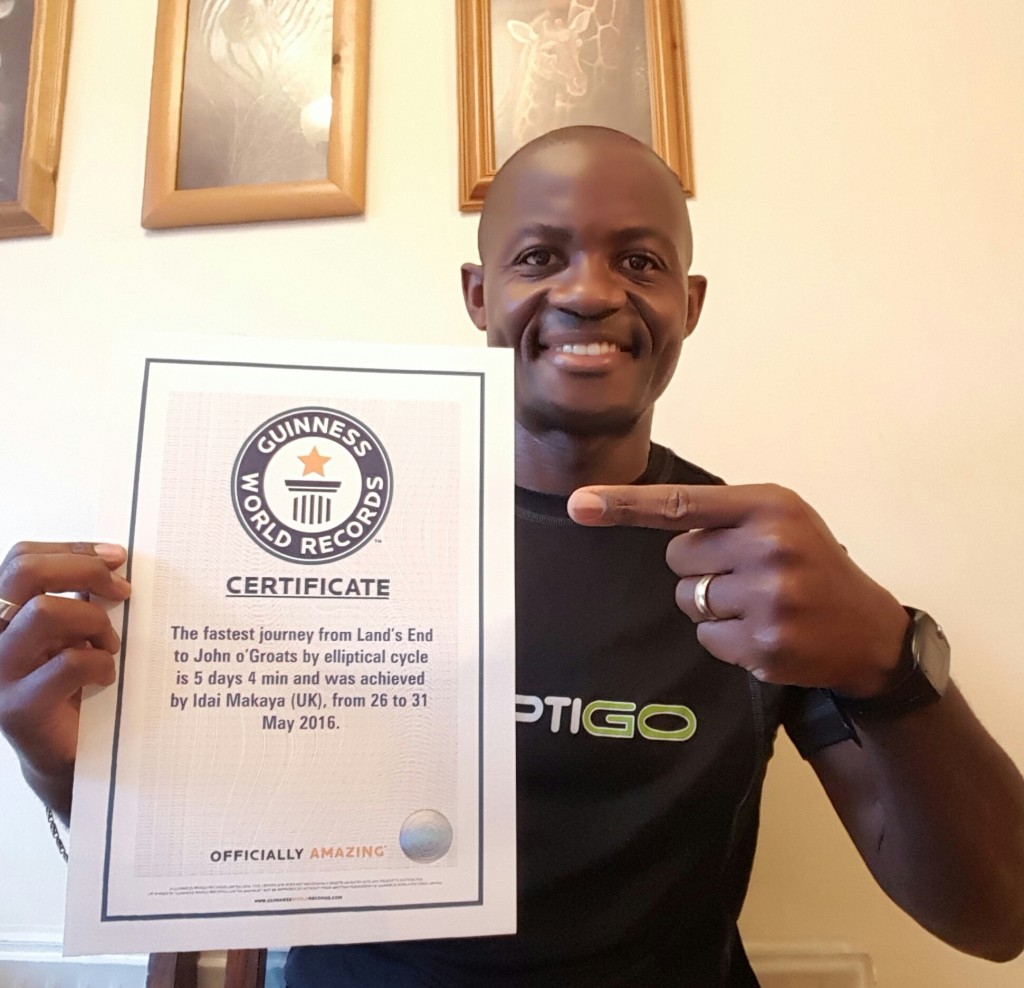 In 2018 I rode TWICE across Britain to set a new Guinness World Record for the 2,768km (1,720-miles) return journey between John o’Groats & Land’s End on an elliptical bike. I covered 240km (150-miles) a day and took 11 days 10 hours & 31 minutes to complete the world record ride in memory of my late brother Garai Makaya, who sadly passed away on 11th February 2017 in a skydiving accident.

And, in 2020, I broke the Guinness World Record for the most chin-ups completed within 24-hours. For the previous 4 years the 24-hour chin-ups world record had stood at 5,094 reps. But between 25th & 26th September 2020 I exceeded the old record by 246 reps: eventually finishing my world record attempt on 5,340 reps. My new record is listed in the 2022 edition of the Guinness Book of Records and more information about my 24-hour chin-ups world record attempt can be found in my event report on this link. 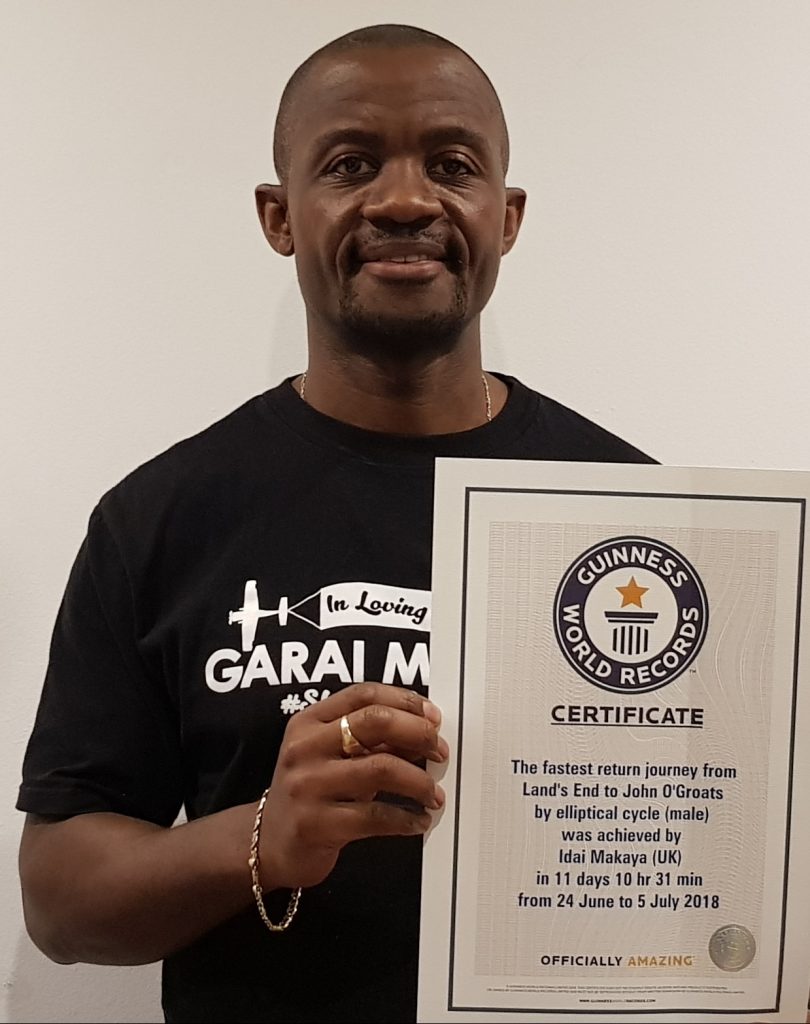 I strongly believe in the use of Intermittent Fasting concepts for health & well being (as well as for endurance training) and I encourage the pressure-testing of all scientific concepts relating to human physical performance, in order to determine their true effectiveness (as opposed to an unquestioning, dogmatic acceptance of the status-quo). I begun my personal exploration of Intermittent Fasting techniques in the late 1990’s and I’m now the world’s most experienced Intermittent Fasting practitioner in relation to its applications in hard-core, long-distance, ultra-endurance fasted training.

I also base most of my weight-loss fitness coaching plans around an Intermittent Fasting approach, as it’s almost certainly the simplest and most effective way to break food addictions, or to achieve remission of type 2 diabetes (in combination with an appropriate exercise plan). Over the last decade I have worked with a large number of clients to successfully break through weight loss and physical performance plateaus using Intermittent Fasting, so if you’re interested in the Intermittent Fasting approach (but have failed to implement it with success on your own) I am more than happy to share my expertise and experience; having worked with many clients, over many years. 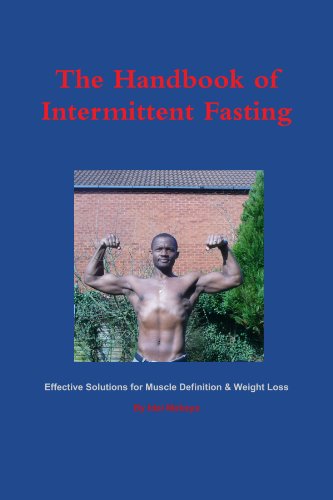 To validate my fasted endurance training principles I have completed a large number of zero-calorie century rides on my ElliptiGO bike, fasting on water only. A number of my fasted training ElliptiGO rides have lasted longer than 24 hours and have covered double-century distances (beyond 200-miles). My longest fasted training ride took place in 2014 during a 42 hour water fast. In that ‘extreme experiment’ I cycled for 39 hours on a very hilly course and logged more than 335-miles in total distance.

Such experiences (and the findings of numerous scientific studies) have led me to conclude that fasted training is both beneficial and safe, when used correctly. And my own experiences (as an athlete and fitness coach) have convinced me that intermittent fasting is a very safe and simple-to-use weight management solution for almost everyone – ranging from serious athletes to formerly sedentary people who are just starting out on their first health & fitness journeys. 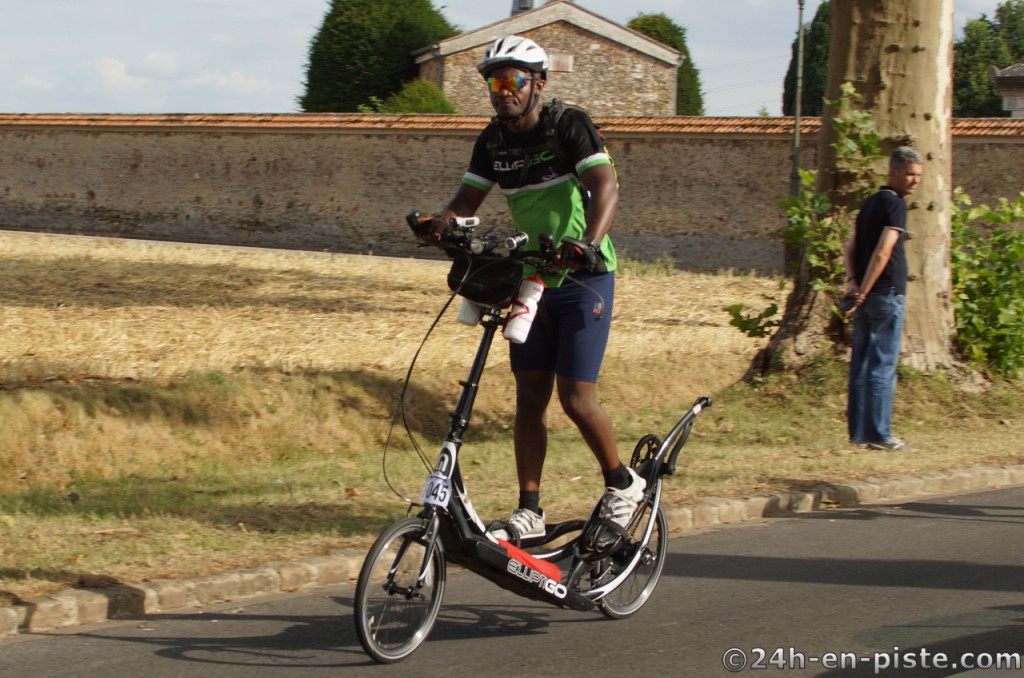 Having worked in a variety of senior management roles in some of the world’s most innovative & successful Health, Fitness, Sports Injury & Healthcare organisations I’ve had opportunities to work closely with Britain’s leading Doctors, Surgeons, Fitness and Healthcare professionals and I have also worked with some of the world’s most successful athletes in strength & endurance sports.

I diligently continue my research into all forms of self-improvement and health advancement, using a multiplicity of insights and ‘experiments’ to develop useful approaches which I hope will benefit many other people in their own unique quests for optimum health and personal fulfilment. 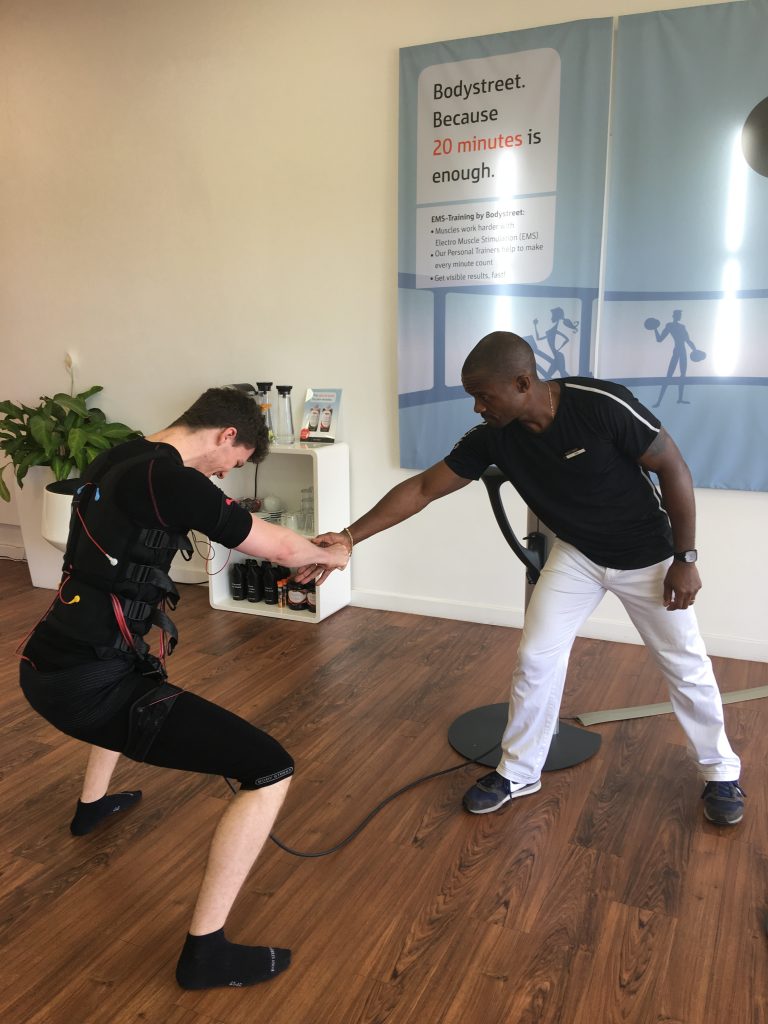 I live in Milton Keynes with my wife, daughter and son. I believe in God and I respect other people’s personal, moral and spiritual beliefs (as long as those beliefs honour the principle of treating others in the same way as we’d want to be treated ourselves).