There are many aspects to training for a very long ride like the PBP 2015 Audax. Some of our focus needs to be on fitness and some of it needs to be on efficiency and comfort. Riding form on the ElliptiGO – or any bike – is important, because keeping going for days on end requires a degree of comfort and a degree of efficiency. The type of form required to ride well in an event like PBP 2015 has to be practised and bedded in. 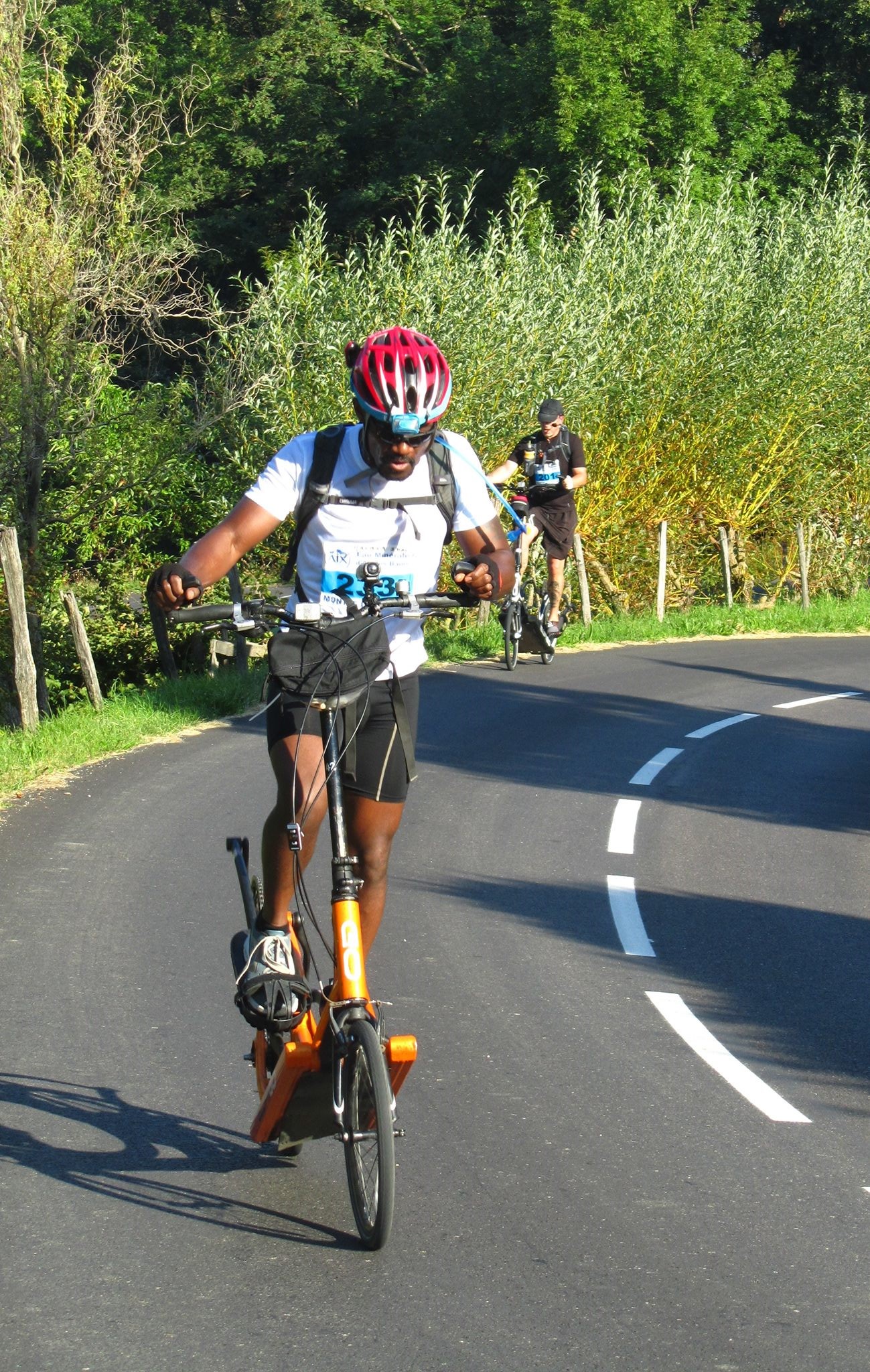 The basics of ElliptiGO riding technique are based on minimal upper body involvement – with most of the rider’s weight supported on the legs. So the hands are only used for steering and balance, with a relatively light and relaxed grip. This translates into a rather upright position, a lot like running or walking. This posture minimises pressure on the palms, arms and shoulders – and the posture also minimises stress on the neck.

What really matters in your riding technique, when preparing for an ultra-endurance ride is the mechanics actually at play when you ride. So if you learn to drive down through the heels – using higher gears and at a low cadence – it allows your body weight to do more of the work. This aspect – combined with coordinating your movement such that ALL your weight is only ever above ONE LEG at ANY time in the pedal cycle – is usually sufficient to get the maximum efficiency gains.

The last bit of the last paragraph – ride on just one leg at a time – is crucial, because the average (short distance) ElliptiGO rider actually rides on BOTH feet at all times (using the returning foot to counterbalance the bike). This is actually what I’d call ‘sprint form’, which is great for inefficiency and for running cross training/fitness – but it is inefficient and only the most talented athletes can comfortably ride a century (or further) using this technique.

So you must ride in a more ‘leisurely’ manner for Audax long distance riding, by using the weight of your body to press down the pedals (rather than just relying on your leg power). Doing this requires the use of a relatively a high gear (to allow your feet to move slowly enough for you to naturally transfer all your weight from one foot to the other, without having to think about it all the time).

This transference of your weight from one side to the other actually mimics walking (more so than running) and it circulates the blood in your feet, helping to prevent numb feet or forefoot nerve discomfort (often referred to as cyclist ‘hot foot’) during longer rides. An important factor to be aware of when you practice this is that by resting the returning foot on the foot plate you are forcing the driving leg to work harder in lifting the returning foot back to the driving position.

The same logic applies to cyclists riding road bikes. A rider can actively return the non-driving foot to the highest driving position using the hip flexors to lift up the returning pedal – or the cyclist can use the driving leg to do the work by resting the returning foot on the pedal instead of actively pulling it up.

Think of this in mathematical terms. Your legs make up about 1/4 of your weight. By lifting up the returning leg rhythmically you are adding 25% of your bodyweight to the driving stroke. That is a significant improvement in your efficiency and is worth practising for the gains it will bring.