Over the last few months I’ve had the privilege of speaking to a number of leading personalities in the fields of sports and physical conditioning and have been able to gain some really useful insights into their experiences and beliefs around conditioning – especially in relation to the martial arts. This month I’ll be looking at the aspect of combining martial arts training with bodybuilding – the purposeful bulking up of the muscles to create a larger, more powerful looking physique. This combination of disciplines is quite commonplace in our sport for a number of different reasons – some of which I’ll outline in this article.

To complete the article I will also have details of an interview I held recently with Flex Wheeler, one of the most successful bodybuilders of all time (and also a long time martial artist). My chat with Flex will outline how he has been able to combine the two disciplines successfully over the years and will also outline some of the pitfalls he’s come across in his long training journey. 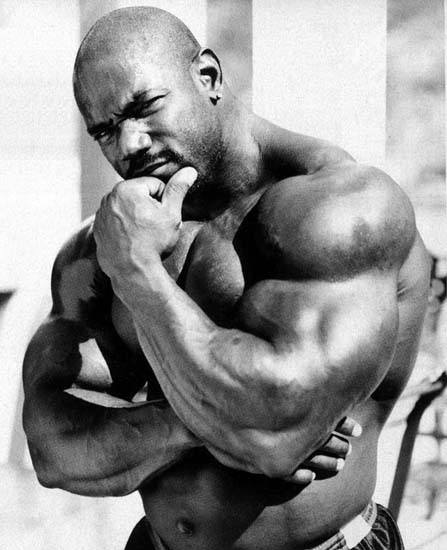 Bodybuilding is different from generalised weight training in that it’s aimed primarily at enhancing the athlete’s appearance (by growing the muscles), rather than at meeting specified performance measures. It is an aesthetic discipline based mainly on the opinion of the beholder. In combination with martial arts it is best that bodybuilding exercises are also designed to improve your actual physical performance. Luckily, the main foundation of building the muscles is that the stronger a muscle becomes, the larger it has to grow. This is true to varying levels, depending on how one trains, but shows diminishing returns as one increases the level of bodybuilding training. This is actually good news in many ways, because it is probably possible to obtain over 80 percent of one’s maximum bodybuilding potential from very basic training.

Using basic training will suit most recreational bodybuilders and will allow them to divide their time adequately and appropriately towards both disciplines, in order to get the most out of their training.

Even a very basic strength-conditioning program for martial arts can serve as a bodybuilding training program as well – so you can actually drive both sports at the same time. 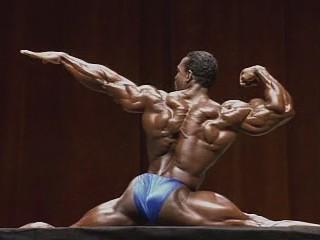 The key thing to focus on if you do this is to ensure you aim to continuously increase the amount of weight lifted in training, as time progresses, and to use basic compound exercises (which require many muscles to complete the movements). Such increases in the intensity of weight training should be incorporated slowly/gradually to give time for the muscles to adapt to the workload.

The best compound exercises for a strength-building program – which will also build the muscles very well – are squats, deadlifts, bench presses, shoulder presses, rowing movements (with weights) and use of the pull-up bar. A biceps curling movement, some abdominal training and a calf raise movement can be added for complete, full-body training and aesthetic purposes. Don’t perform more than 3 sets of each exercise and you can either do all the exercises in one session – or spread them out across the week (depending on time commitments). The results are usually the same, whichever method you use to group the exercises together.

Once you start to lift heavier weights, you will need to reduce the frequency of bodybuilding training to give the muscles time to repair and develop. Advanced bodybuilders usually only perform the individual exercises just once a week.

The advantages of bodybuilding to a martial artist are:

The main drawbacks of bodybuilding training for a martial artist are as follows:

Flex Wheeler at his peak…

Below is a summary of an interview for MAI, in which Flex was very friendly, animated and informative:

Idai Makaya: Hi Flex, how is your training going at the moment?

Flex Wheeler: It’s going great. I am currently in the process of peaking for a photo shoot to promote a new line of sports supplements which AAEFX is releasing. 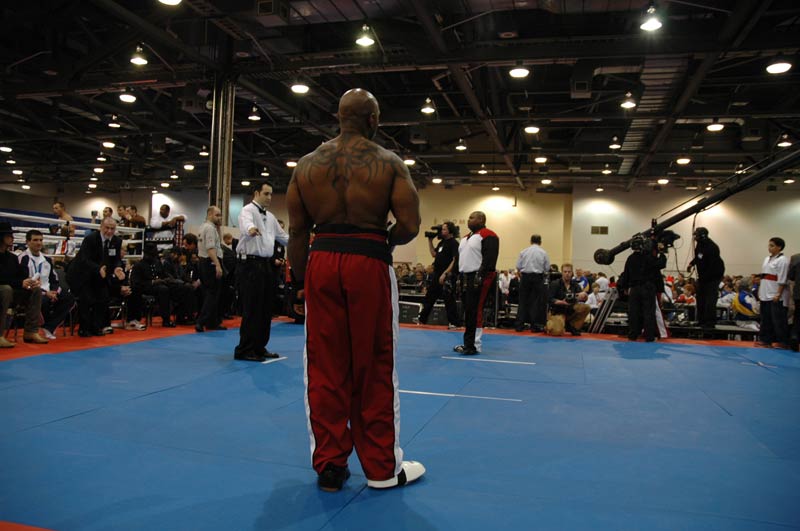 Idai Makaya: What martial arts styles do you train in at the moment and why?

Flex Wheeler: I normally train in the style of the local instructors in any area that I live in. I believe martial arts training is more about the fighter than the particular style studied. A good fighter is a good fighter – regardless of his/her martial arts style. I currently do Olympic Taekwondo and was really getting into it recently, despite the fact that I am in my mid forties now!

Idai Makaya: What has curbed your enthusiasm for martial arts training?

Flex Wheeler: I still train hard but I injured myself a few times recently and that forced me to take stock of things and consider my age. I got a serious knee injury when trying to make the Taekwondo team – I often get carried away with my competitive approach to sports! I guess it comes from being in professional sports for so long.

Idai Makaya: Are you still as flexible as you were in your competitive bodybuilding days, when you could do all the versions of the splits, etc?

Flex Wheeler: These days it comes and goes, depending on what I’m doing. I was overdoing the flexibility training due to my renewed enthusiasm for making the Olympic 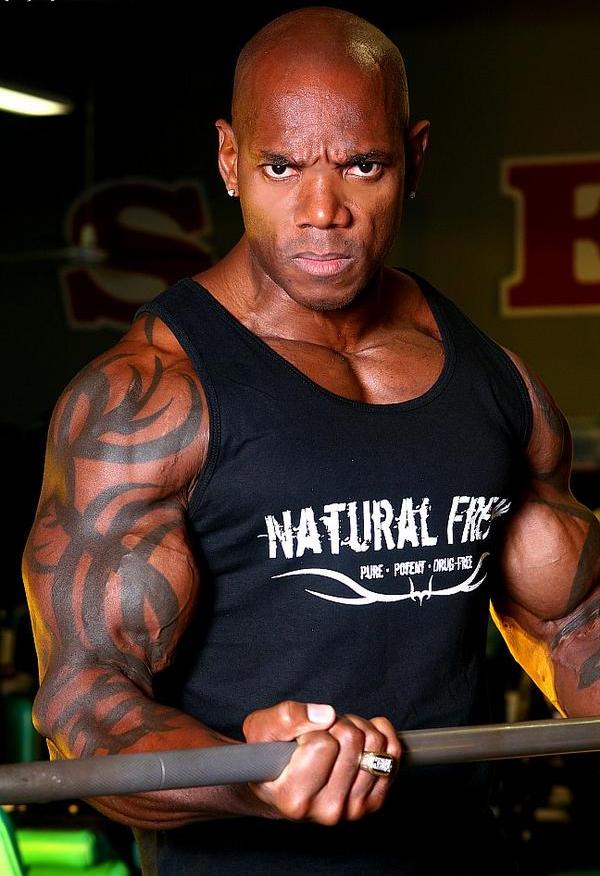 Taekwondo team, while also training full-on in bodybuilding for our new product launch. I guess something had to give and I seriously hurt my knee – so I’m not that great at the moment. But I’ll hopefully get better! I just thought, Olympic Taekwondo is so much simpler and less complex than some other martial arts codes – and I’m good with my kicks – so I figured even more flexibility would help me.

But I’m 43 now and the heavy schedule meant I tore my knee by accident. Before the Arnold Schwarzenegger Classic exhibition bout in 2005 I also tore my rotator cuff and almost pulled out – that’s why I was getting a little gassed out during the last parts of the fight. It was a disappointment from that perspective.

Idai Makaya: Sorry about that Flex, at least you won the fight. Is the knee injury impacting on your bodybuilding at all? What shape are you in at the moment?

Flex Wheeler: I’m actually going along well with my bodybuilding training, despite it all. I weigh between 215lbs and 225lbs – not bad for my age, etc. I’ve taken a full 8 months to get in shape using my new supplement lines. The martial arts training is really good for my stamina. As a pro bodybuilder I had to drop my martial arts training for a few years – you can’t do both at that sort of level and still do yourself justice. For that reason I was really 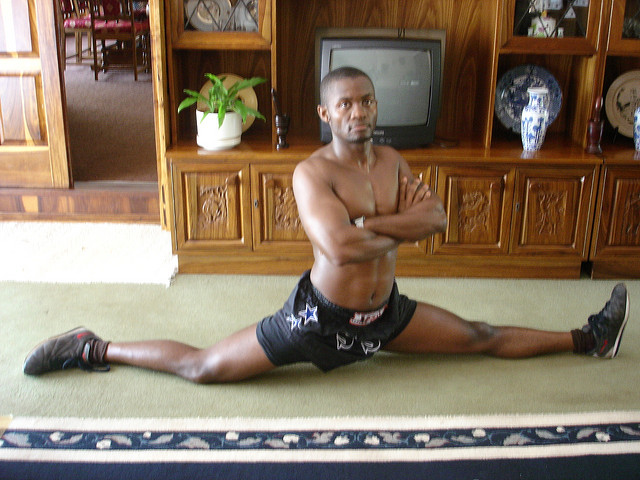 out of shape when I started martial arts again after a 10 year break. I also noticed my reflexes weren’t like they used to be, I was de-trained. Like I said, I was disappointed by my performance at the Arnold Schwarzenegger Classic because my shoulder injury lost me a lot of training in the lead-up to the fight. I got tired really quickly. Pure bodybuilding training does nothing for your endurance, unfortunately – it was a little embarrassing as a pro athlete. But I’m up to speed now.

(IM: Bodybuilding gives strength but does little for stamina).

Idai Makaya: To end off, what does the future hold for Flex Wheeler? I know you were recently invited to take part in the latest Bruce Lee Documentary. Please tell me more. 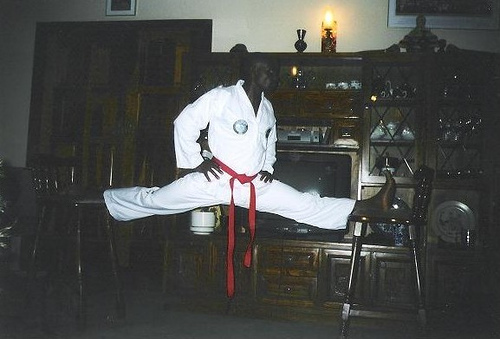 Idai Makaya believes Suspended Splits can’t be done without the strength gained from Bodybuilding Training – and proves it in this image.

I also still write my monthly column for Muscular Development Magazine and recently completed filming for a new documentary supported by the Bruce Lee Foundation, about the life of Bruce Lee and all the athletes he has inspired. It’s called “How Bruce Lee Changed the World“ and is set to air on the History Channel (and internationally) to mark 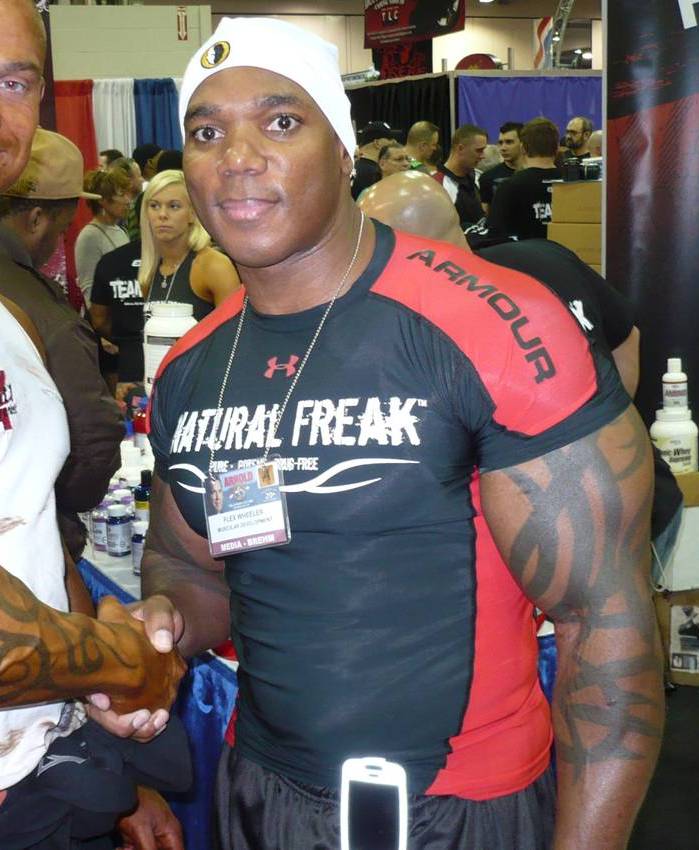 the 35th anniversary of Bruce Lee’s passing. Bruce’s daughter, Shannon, is an executive producer on this documentary and his widow Linda has also cooperated with the production company, Waddell Media, to make this prime time documentary a reality.

Idai Makaya: Thanks Flex, it’s been a pleasure speaking to you and it’s great to see you getting more involved in the martial arts again. Good luck for the future and God bless you.

In conclusion, I hope this short interview will give martial artists some insights into combined martial arts and bodybuilding training and perhaps some of Flex’s experiences will help you with your own workload planning and decision processes – if you are considering taking up bodybuilding in any shape or form.

Always remember, when it comes to training, as in life in general – if you fail to plan you plan to fail. Knowledge is power so please make sure you find out as much as possible 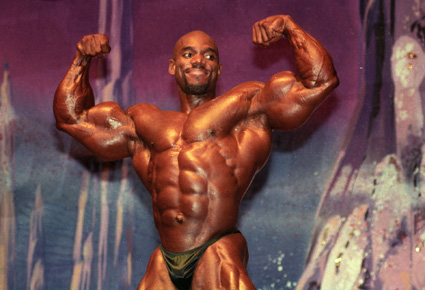 about any aspect of conditioning you want to take up – BEFORE you actually make changes – so your decisions are then based on good information. Balance training and look out for injury. That way you will always succeed.

My future articles will continue to look at the various conditioning and training options that confront us as martial artists and will hopefully cast more light on how you can use new ideas to keep yourself challenged and continuously getting better. Happy training until then!